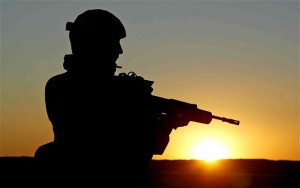 Already by the year 2011, with the accelerating consumption of natural resources and with human numbers having increased from 6 to 7 billion within a scant 12 years, the scale of damage to the earth indicated that we were approaching the limits of sustainability. Human survival as a species now requires a major effort to preserve nature and minimize activities that deplete and destroy the earth’s sustaining ecosystems.Yet, we continue to allocate a huge portion of our national budget to the Pentagon, and persist in preparing for future military missions.

As American troops withdraw from Iraq and the war in Afghanistan enters its 11th year, it is vital to recognize that for Americans, as for people everywhere else in the world, national security depends ultimately on maintaining natural security (i.e., on the protection and preservation of ecosystems).

National budgets can indicate some of the costs of military activities and also suggest the extent to which these activities divert intellectual and monetary resources away from addressing human needs.For example, using official government data, True Majority Action points out that the $459 billions spent on the 10 years of war in Afghanistan could have provided all the needed repairs on America’s bridges, plus 10 years’ costs for the nation’s elementary school teachers, its police officers, and its university scholarships, plus all of the state budget deficits projected for 2012.

http://bit.ly/mT1dXO via @usaction #bridgesnotbombs.
In an op ed in the NY Times, Paul Krugman, the economist, asks, “Why would anyone prefer spending on destruction to spending on construction, prefer building weapons to building bridges?” His answer, in its simplest terms, is that “the ‘military big spenders’ want the public to believe that cutting defense will increase unemployment, but that, by the same token, public spending on socially-useful programs will not result in job-creation.”

Bombs, Bridges and Jobs – NYTimes.com – New York Times Oct 30, 2011 … Bombs, Bridges and Jobs by PAUL KRUGMAN
Among the many studies of the share of military expenditures in national budgets, one produced in 2011 by the Eisenhower Study Group at Brown University is particularly thorough and comprehensive.Among other things it takes a long view of the economic costs of war by factoring into the total expenditures America’s commitment to veterans after the war ends, as well as military action’s share of the interest on the national debt and the costs of conducting large deployments of war-related personnel overseas.